What are the different types of brain injuries?

A strong knock to the head can cause the skull bone to break. Sometimes the injury results in a simple cracking without movement of the bone. These fractures usually heal on their own.

When pieces of bone are displaced and press in against brain tissue, a more serious injury results called a depressed skull fracture. To prevent further brain injury or bleeding, these fractures usually require surgery to remove the bone fragments from the brain. Because the skull is damaged, or open, it cannot protect the brain as it did before. The once protected brain is now exposed, which leaves it vulnerable to infections and further injury.

A contusion is the bruising of brain tissue.

The area that is bruised and the seriousness of the brain injury depend on where the head was hit and how hard it was hit. Common places for contusions are the frontal and temporal lobes. The underside of the frontal lobes and the tips of the temporal lobes have the biggest risk of contusions because they can be dragged across the very bumpy and sharp inner surface of the skull.

Bruising to the brain can cause bleeding and swelling of the brain. This can be very serious. 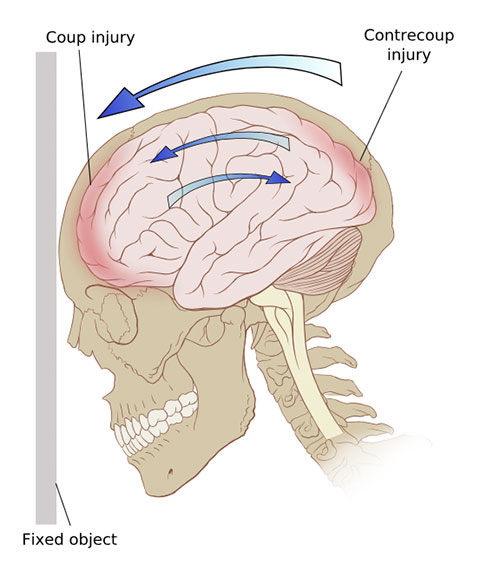 Diffuse axonal brain injury can be caused by going at a certain speed, and then suddenly slowing down, causing the brain to move at different speeds inside of the skull. The brain tissue can twist and turn at the time of injury. This can cause extensive tearing of nerve tissue throughout the brain. The brain messages are slowed or lost.

The disturbance in the brain can produce temporary or permanent widespread brain damage.

A person with a diffuse axonal injury can have a variety of impairments depending on where the shearing or, tearing occurs within the brain.

Treatment is aimed at managing swelling in the brain because torn axons (nerves within the brain) cannot be repaired.

A strong hit to the head may damage or break blood vessels inside the brain.

The collection of blood from these injuries is called a haematoma. There are three different types of hematomas depending on where the bleeding collects: 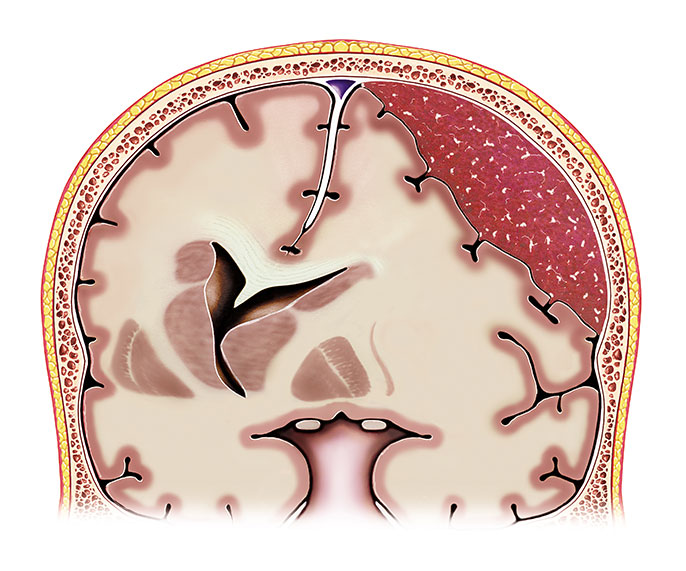 Often a neurosurgeon can remove subdural and epidural hematomas and stop the bleeding because they are near the surface of the brain. Bleeding deep within the brain tissue may not be treatable with surgery, like the intra-cerebral hematomas.

Blood vessels in the brain can break and can cause blood to leak into and around the brain.

Blood can accumulate in different spaces in the brain. If a blood vessel breaks and blood collects in the subarachnoid space (which is between two skin-like layers on the surface of the brain) then this is called a subarachnoid hemorrhage. Blood can flow from the site of injury and enter the ventricles of the brain where cerebral spinal fluid is present. This is known as an intraventricular hemorrhage.

If a person is on blood thinners like aspirin or Warfarin prior to an injury more bleeding may occur. Alcohol use before the accident can also make this problem worse.

A concussion is caused by either a hit to the head, or by sudden changes in speed (for example a fast car hitting a pole and stopping very suddenly). A concussion happens when the blood vessels and/or nerves in the brain are stretched and damaged.

A person with a concussion may experience a loss of consciousness or they may remain conscious, but feel dazed.

Concussions may cause headaches, nausea, vomiting, dizziness and problems with memory and concentration.

Even through concussions rarely show up on CT scans, they can result in temporary or permanent damage. It may take weeks, months or very rarely a few years for a concussion to heal. The effects of repeated concussions are more likely to last longer.

A hypoxic brain injury results when the brain receives some, but not enough oxygen. The cells in the brain need oxygen to survive and function. Decreased oxygen can cause brain cells to die.

This is common in patients who have lost a lot of blood from an injury (such as a broken leg or a broken pelvis), or in patients who have problems breathing and therefore cannot breathe in the right amount of oxygen that the body needs to feed the brain. This can happen if someone has a chest injury where the lung is collapsed, or, if the person is unconscious and is not able to take in deep breaths.